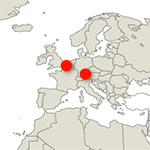 Wheig was associated to the Engineering works and to the Operation & maintenance of two major biomass anaerobic digestion plants :